The Rights tab on your Track or Release page is where catalogue items are connected to one or more contracts to account for Sales/Returns & Costs. To what extent a contract will interact with associated revenue is defined by the Participation Rate. So, once a contract is selected the Participation Rate dictates how much revenue is to flow through the contract’s terms. Adding a Contract with a participation rate of 100 would mean 100% of the sales revenue of this track will be allocated to this particular Contract. It is then down to the royalty rates on this Contract to calculate how much of this sales revenue will eventually be paid as a royalty to the artist.

In the below example, all revenue will be allocated as an input to the Artist A contract.

It is worth taking a moment to look at how Participation Rates differ in relation to whether a linked contract is set as a Royalty or a Profit Share.

As a rule of thumb, for the most part, you will attach Royalty contracts at a rate of 100 & let the Sales Terms handle the calculation.  For example, you may have three primary artists on a track all with different agreed royalty rates, but participating equally in the revenue generated by that track. So all three contracts are attached at a rate of 100. The exception to this would be a release product where a party is due a royalty only in relation to an element of the release. Think about a contributing artist on one track on a four-track EP. The artist is not due a royalty on any revenues generated by the other three tracks on the EP. So their contracts is applied at a rate of 25 to the EP.

In this style deal you do not need to be concerned about the sum total of all contracts.

You need to think differently about these types of deals. Let’s jump straight into an example to illustrate why.

The function works exactly the same between the Sales/Returns area & the Costs, but is separated out as participating parties in costs typically differ from those due royalties on sales.
If however the contracts to bear the costs are the same as those due a royalty, the Copy from Sales button in the Costs area does exactly what you think it does.

To illustrate how this tool is useful, let’s think about a ten-track artist album that has a featured artist on one track, Track One. Whenever Track One generates revenue both the primary & featured artists are due a royalty. So both of these contracts are linked to the track at a rate of 100 (we’re keeping things simple: this is Royalty scenario, not Profit Share). Revenue generated by Tracks 2-10 are only due a royalty to the primary artist, so only this contract is attached to these tracks.

So far, so simple. But what about when the Release generates revenue?

However, the featured artist is only due a portion of the release revenue as they only perform on one track. Once both primary & featured artist (FA) contracts are selected, hitting the Pro Rata button should populate the rates of 100 for the PA & 10 for the FA. Ie the FA is only present on 1/10, or 10% of the tracks on the release & so is due a royalty on 1/10 of the revenue.

The maths in this scenario are quite simply. But imagine we have a fourteen track album, with an FA on three tracks, one producer on nine tracks with another on the remaining five & a bonus remix version of one of the FA tracks. This is where this tool comes into its own

Available on the Rights tab of your Tracks, this tool allows you to allocate the revenue to a different set of Contracts, under the condition the Track revenue was part of a specific release. This is mainly a useful tool for distributors, in case two of their clients have released the same Track, by one licensing the track to the other. 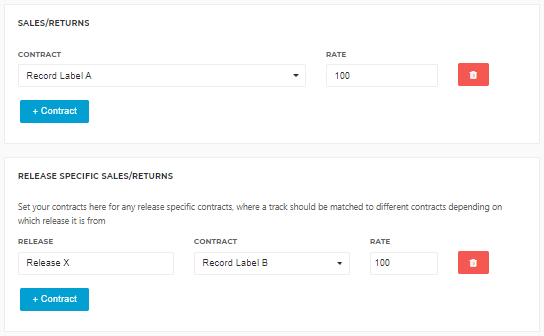 PLEASE NOTE OUR DOCUMENTATION HAS MOVED: